TOMBALL, Texas – Hunter Pence Baseball 2020 Calhoun finished off an impressive run at the 2019 WWBA South Qualifier on Monday afternoon, capturing the title and paid bid to the WWBA World Championship with a 6-4 victory over Banditos Scout Team.

Big moments sometimes bring out the game’s best stars, and that was exactly the case for Kris Calhoun’s team on Monday. Trailing 4-3 in the top of the seventh inning, outfielder Rhett McCaffety came to the plate with two on and two out, looking to keep his team alive. 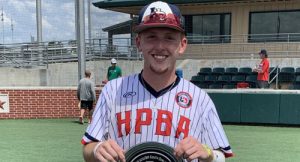 McCaffety, who had already launched a home run over the wall in right field during his first at-bat of the championship game, drove the first pitch he saw from Banditos Scout Team southpaw Hunter Hollan to the same spot, giving his team the 6-4 lead.

“I really didn’t get much sleep last night because I had a bad game yesterday and I was beating myself up about it a little bit,” said McCaffety, who took home MVP honors and recorded a two-inning save in the semifinal victory. “I knew that lefty [Hollan] liked his fastball, and I know that Banditos coach knows how to pitch to me really well. I saw him shake and knew I was getting a fastball. I was ready for it.”

McCaffety was certainly ready for the first-pitch fastball, and was ready for whatever was thrown at him today following the tough outing the day before. This message of resilience and toughness is one that Hunter Pence Baseball 2020 Calhoun head coach Kris Calhoun tries to engrain in his players each day.

“All we ever preach on our team is to learn from everything, move on, and go get the next one,” said Calhoun, who was overcome with emotions following the championship victory. “You can’t teach heart man, and these kids have had every bit of it since day one.”

The Banditos Scout Team has long been one of the premier organizations in the country, and certainly a staple of excellence in the greater Houston area. With 13 Division I commitments on the roster, claiming this victory feels like a milestone for Coach Calhoun.

“The Banditos are the measuring stick around here. We have been building and training to play on that level with them and give them that kind of game. The game went our way today, and it could have gone either way. I think it came down to who had more heart in the end.”

Turning a stellar performance on the mound in the championship game was Mitchell Andrews, who patrolled left field for the most of the tournament. A primary outfielder, Andrews was able to compete and make some big pitches to keep the Banditos Scout Team lineup at bay, just what his team needed to secure the victory.

The Most Valuable Pitcher of this year’s WWBA South Qualifier is Baylor commit and Banditos Scout Team righthander Cody Howard. Howard turned in six innings on Sunday, allowing just one hit and striking out 12 batters.

The victory in Monday’s championship gives Hunter Pence Baseball a paid bid to the WWBA World Championship in Jupiter, Florida next month. Normally one of the elite events in the country each year, Coach Calhoun is excited to get down there and compete.

HP’s very own letting us know how it’s going to be! Pop that collar and tune in….we are proud of you Pey! ...

Hunter Pence Baseball Academy is at Premier Baseball of Texas.

I’ve been on my grind, ain’t makin’ no limit