HP’S VERY OWN JJ GOSS SELECTED IN THE FIRST ROUND TO THE TAMPA BAY RAYS!!!

JJ Goss first walked into Hunter Pence Baseball Academy (HP) with goals of hoping to get an opportunity to play college baseball. He’s what some would call a “late bloomer” and was undersized most of his youth baseball career. Leading into his sophomore summer playing for HP Baseball – Danielson, he started to blossom into an under the radar prospect. He started to grow along with doing Aaron Cunningham and Brent Powers’ HP Velo & Arm Care Program, and was in excellent shape leading into his first summer ball season. His fastball went from being in the low-to-mid 80’s to consistently sitting in the upper 80’s. By the time we were half way through his first summer he had touched 90 MPH, and every major D1 program in the country was after him. The the following Fall at HP, JJ visited and talked to schools like LSU, TCU, Arkansas and Texas A&M. After a lot of stress deciding what coaching staff and college would be the best fit him with his family, he and the HP coaching staff made the call that he would become an Aggie. 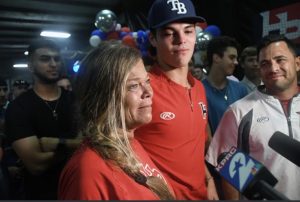 Not long after the dust settled on becoming and Aggie, we started to hear some buzz from the local MLB scouts in the area. They were curious who this kid they have never heard of was and when they could see him throw. We started to see a few scouts at our HP fall tournaments and his HS games here and there. This momentum carried on into his junior summer with HP. Every time he pitched we had numerous MLB scouts in attendance. By the end of the summer, JJ’s fastball was sitting in the low-to-mid 90’s. He even had an outing late in the Summer where he touched 96 MPH.  The timing of this could not have been better, as there was somewhere in the ballpark of 75 scouts in attendance with radar guns and video cameras. His ability to attack hitters, throw 3 pitches for strikes and be extremely efficient with his pitch count at high velocities was incredibly rare for a kid his age. Not to mention the amount of pressure on his shoulders to preform with all the scouts in attendance. The fact that he looked so polished consistently shot him up the Perfect Game & PrepBaseballReport rankings, and landed him a spot at he Perfect Game All-American Game at Petco Park in San Diego. Every HS players dream. 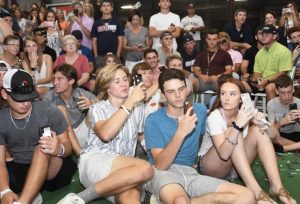 Leading into the fall of his senior year he would meet with all 30 MLB teams for an in home visit. After a long HS season and summer season he had thrown somewhere in the range of 80 innings, so he decided it would be best to take the fall off from pitching to hit the weight room and gain some weight. He never failed to do the HP Velocity program with pitching coordinator Aaron Cunningham, but in addition he also incorporated a weight lifting routine at DST with trainer Jordan Ainsworth. Between the two programs he was able to rest his arm and recover, but at the same time hit the gym 4 times a week. His trainer Jordan was able to pack on 20 pounds of muscle to his lean limber frame before his HS season started.

Going into his senior HS season he was more than prepared. JJ ended up dominating on the mound and also contributed quite a bit as a hitter and outfielder as well. He broke the HS strike out record held by current Houston Astro Corbin Martin. He and his HS teammate and Matt Thompson
(2nd round pick to White Sox) lead Cy Ranch to the 5th round of the playoffs where the streak was ended in a three game serious to McKinney – Boyd. This loss was hard for Goss as his goal from the start was a state championship, but the loss came just a couple days before the MLB draft.

The HS season and graduation had been distracting, keeping his mind at ease about the draft but, needless to say he was excited. Mock drafts and talk from MLB scouts and agents seemed to guarantee him being pick in the first two rounds. This lead to JJ and his family wanting to have a small gathering with his support group at Hunter Pence Baseball Academy. This small gathering turned into a pretty big watch party with all of his family and closest friends. Shortly before he was picked in the supplemental first round (#36 overall), he received a call from Rep 1, his advising group. They assured him he would be the next pick.

He re-entered/sprinted back into the watch party after the private call, full of excitement. The “small” group of 150 people anxiously awaited his return and surrounded him before the announcement was read over live TV on MLB Network. The pick was made and JJ was selected! The facility erupted with joy, tears, music and love. He embraced his family with tears of joy in his eyes, confetti popped everywhere and the media was there to capture it all. 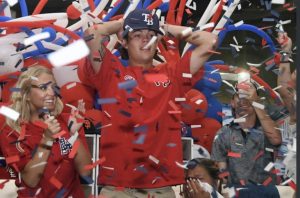 We still find ourselves in disbelief daily thinking about it and talking about it. We at HP, as you can imagine are incredibly proud of JJ, his mother Cheryl and his twin sister Caitlyn. We have become like family over the last couple years and we are forever grateful for this beautiful ride. JJ has already reported to work with the Rays in Florida and is loving every second of it. We are anticipating him to stay there for the remainder of the season and focus on meeting the staff and getting grounded as a professional athlete. His future is bright and we imagine that he will soon earn the respect of his teammates and front office and work his way up the ladder to the Tampa. 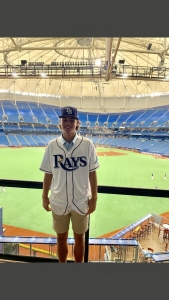